I’ve been wanting to photograph the Milky Way for a while, but I live in Glendale in the middle of urban Los Angeles and the best I can capture of the Milky Way from outside the cave are some small smudges. I recently joined a local photography meetup group and when the organizer announced a trip Joshua Tree National Park to photograph the Milky Way I jumped at the opportunity. It’s about a 150 mile drive(each way), partly though LA traffic, to the location in the park; I drove there in the afternoon and returned after getting my pictures in the wee hours of the morning. I’ve made the journey twice, in late June and late July since you have to wait for a new moon to avoid the light pollution of the moon. In addition to picture of the Milky Way, I’ve included some sunset pictures to give an idea what the park looks like.

Photographing the Milky Way in these dark conditions presented a couple of problems: focusing and framing. You can focus while it’s light out and then tape the focus ring, but if you change lens you have to do it for the next lens as well. Framing is a problem I’d not anticipated, you can’t see anything on the camera’s live view(my camera doesn’t have a viewfinder); so you have to take a picture and then adjust the camera on the tripod to get the right framing. I like to photograph panoramas and this made it difficult.
Read More 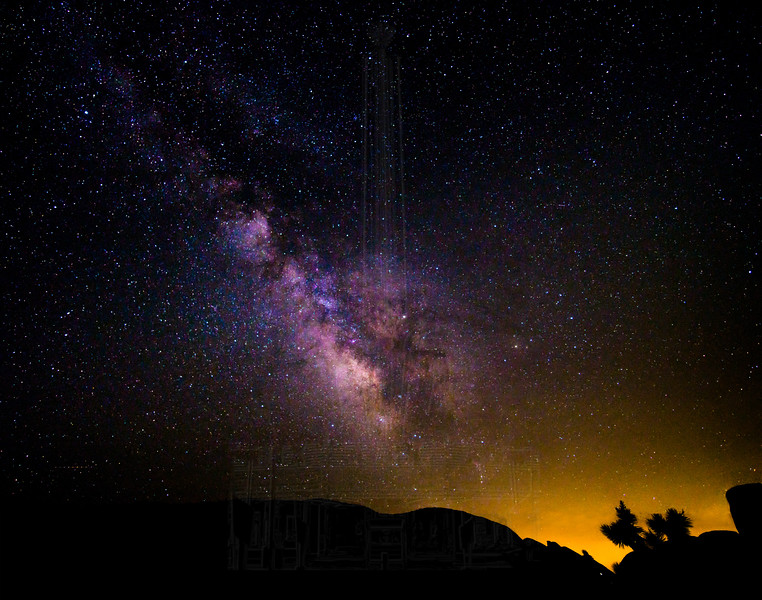 Galactic Center from the first trip.

A photograph of the Galactic Center just before getting ready to leave.