The Return of the Milky Way

As the new moon approaches the opportunities to be able to see the Milky Way at dark locations lends itself again. This month weather constrained the choices of where to shoot; not the record setting heat, but cloudy skies. Since the kid is headed to Australia and New Zealand in late September and will be taking pics in dark sky locations, I insisted that she learn a bit about shooting in that environment. I had two locations selected for shooting: a familiar location(Red Rock) and new place(Arroyo Hondo, about 25 miles west of Santa Barbara). Both locations afforded dark skies and were about the same distance from BillinGlendale.com HQ. We ended up going(with Madame) to Red Rock due to a fire near Santa Barbara and my concern that the smoke might cause problems with shooting. We arrived early enough to still have some daylight to shoot some foreground shots and have some dinner. The skies where a bit cloudy in the beginning but cleared to allow for some pretty nice shots. With the fire near Santa Barbara(Goleta) out, I twice headed up to Arroyo Hondo later in the week to try shooting up there.
Read More 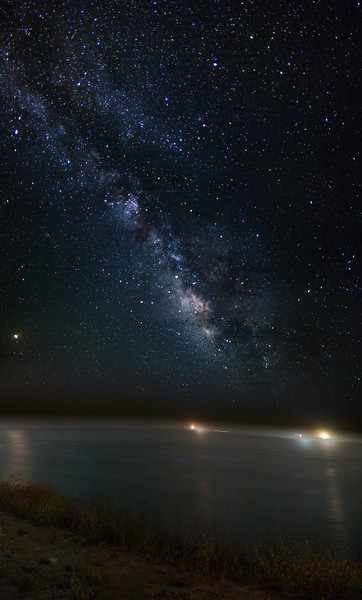 This is actually a panorama of the Milky Way paired with a long exposure foreground and a short exposure to capture more detail from the offshore oil platforms. I was quite happy with the reflections on the ocean of the oil platforms and Mars.