I believe I've mentioned El Aliso in my dispatches here, it was the large sycamore tree along the banks of the LA River that was the location of a Tongva village prior to the settlers arriving from Mission San Gabriel to found the City of Los Angeles. A few months ago a plaque was dedicated a few months ago, I thought I'd venture to downtown and get a picture. That part of my quest was unfulfilled, I was looking for an upright marker, and it's embedded in the sidewalk. I've also been meaning to see this church in Pasadena with a tall tower that you can see from the 210. So I took the train into downtown LA and hopped the Gold Line to Pasadena. I took some infrared pictures of Pasadena City Hall(the last time I did this was before a Balloon Juice meetup in Old Town Pasadena). I've photographed Pasadena City Hall many times, but it's been at night so I've not been able to shoot infrared pictures. While I was there I shot some pictures of both the exterior and interior of All Saints Episcopal Church which is right in back of city hall. Making my way back to the Gold Line station I stopped by Saint Andrew's Catholic Church(my primary goal for the Pasadena leg of the journey. The interior is truly a special treat. So it was back on the Gold Line again for the return to DTLA. I searched for the El Aliso plaque(I think I know where it is now) and walked though the Civic Center up to the top of Grand Park for some IR pics looking towards LA City Hall.
Read More 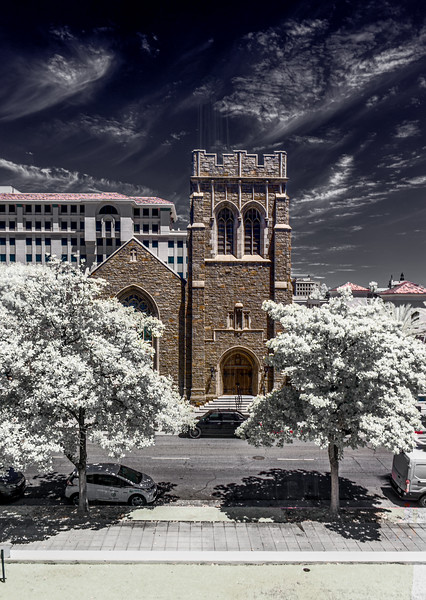 All Saints Episcopal Church is across the street from the back of City Hall. It's a very attractive stone building. I thought It's look good in IR, especially with the scattered clouds in the sky.