In my previous post about the Hollywood Sign, I mentioned that the sign is not on Mt. Hollywood but on Mt. Lee. Mt. Hollywood is about a mile and a quarter east of the sign and was the tallest peak in Griffith Park(until the recent addition of Burbank and Cuhuenga Peaks to the park).

Griffith Park is a large wilderness park on the eastern end of the Santa Monica mountains, a mountain range that runs along the coast to Santa Monica and then inland to Glendale. The Santa Monica’s separate the San Fernando Valley from the rest of Los Angeles. In 1896, Col. Griffith J. Griffith(yes that really was his name) donated over 3000 acres of land to the City of Los Angeles which became Griffith Park. In 1903 Col. Griffith shot his wife in the head(she survived) and was tried and convicted of attempted murder(and did time). After his release from “The Big House”, he wanted to donate money to the city to build an amphitheater, a observatory, and camps for boy and girls. The city refused his gift, however they where happy to be included in his will and all of these things were built(the Greek Theater, Griffith Observatory, and the boys and girls camps) in Griffith Park after the Col. passing in 1919. The park also is home to the Los Angeles Zoo and the Autry Center for Western History. Most of the trails in the park are actually wide fire roads(a major fire burned the southeaster portion of the park in 2007); though there are some single track trails, like the hogback and some shortcuts. Most of the interior of the park is pretty much undeveloped with the exception of some small gardens.

The most popular route to get to Mt. Hollywood starts at the northern edge of the Griffith Observatory parking lot, right by the George Harrison Memorial Tree(it’s a replacement, the first one was killed by beetles). The hike proceeds though Berlin Forest and to a “bridge”, at that point the main trail(fire road) heads to the west and then switches back to the east(there is a shortcut here that makes for a shorter though steeper route). After this long switchback you get to “5 points”(the main trail coming up, the shortcut coming up, the western main trail going up, the eastern main trail going up, and a single track trail going up). The western fork takes you to Captains Roost, a small garden that was pretty much destroyed in the 2007 fire, and then on to the summit. The eastern fork takes you by Daute’s View, another garden that was also damaged in the 2007 fire. Both(and Amir’s Garden further to the north) of these gardens were planted and maintained by private citizens. It’s about a 3 mile, round trip, with a 500 foot vertical climb.
Read More 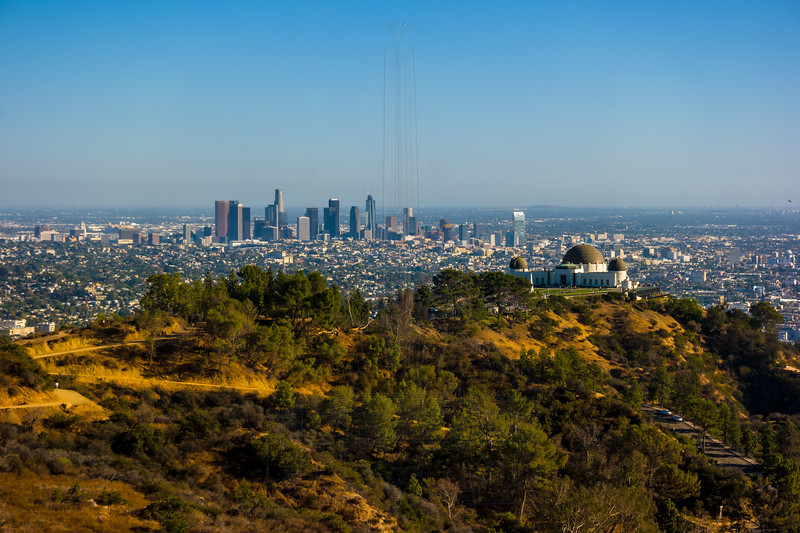 This is the portion of the hike where the trail switches back to the east after traveling west for a bit. There are benches here and an really nice view of the Hollywood Sign to the west.