There’s probably not a more recognizable sight in Los Angeles than the iconic Hollywood Sign(LA City Hall might come close ). The sign was originally built in the early 20’s on Mt. Lee(it’s not on Mt. Hollywood, that’s just north of Griffith Observatory) as and advertisement for the “Hollywoodland” development in the hills directly below the sign. It was not the only sign in the area with the Outlook sign that was further to the west across Cuhuenga Pass and both were lit up at night! After it’s advertising purpose was served the sign began to fall into disrepair with the “land” portion of the sign falling off. In the mid 1970’s the rest of the sign was also beginning to fall down as well(probably a metaphor for Hollywood as well, which had become pretty seedy). There was a big fundraising drive to rebuild the sign, since it had become a symbol of Hollywood(embodying the film industry) and Los Angeles itself. The raised enough funds(mainly due to the work of Hugh Hefner) and rebuilt the sign, replacing the wood with steel and adding additional support so the rest of the sign wouldn’t go the way of the “land” portion.

So how do you get to the Hollywood Sign? First off, you can’t actually go to the Sign, it’s fenced off with security cameras and the LAPD is ready to greet you if you try to scale the fence. However you can hike up the hill(Mt. Lee) above the sign; but that can be a bit tricky too, mainly due to the residents of Hollywoodland, who don’t care much for folk treking through their neighborhood leaving trash and worse. They’re pretty wealthy up there and have quite a bit of political power, so they’ve put up some obstacles. If you ask Google Maps for “Hollywood Sign” it will take you to Griffith Observatory, where you can see a nice view of the sign but it’s not the location OF THE SIGN. Until recently, you’d be able to go up Beachwood Canyon Drive and park(though you had to be mindful of the parking regulations) and hike up past the horse stables; but they welded shut that route a few months ago. You can also approach from the east using a trail off Mt. Hollywood Dr. or hiking up from Bronson Canyon(my first hike up there used this approach, though from a trailhead close to the zoo). There’s also a more rustic route from the west, starting near Hollywood Reservoir climbing to Burbank Peak, then east to Caheunga Peak and then to Mt. Lee. There’s one more route that just goes up Mt. Lee Drive, there’s a locked gate where the it enters the residential neighborhood but there’s a foot path that goes under an arch. I’ve not seen much on-line about this route, but it’s the route I took on my return for this hike.
Read More 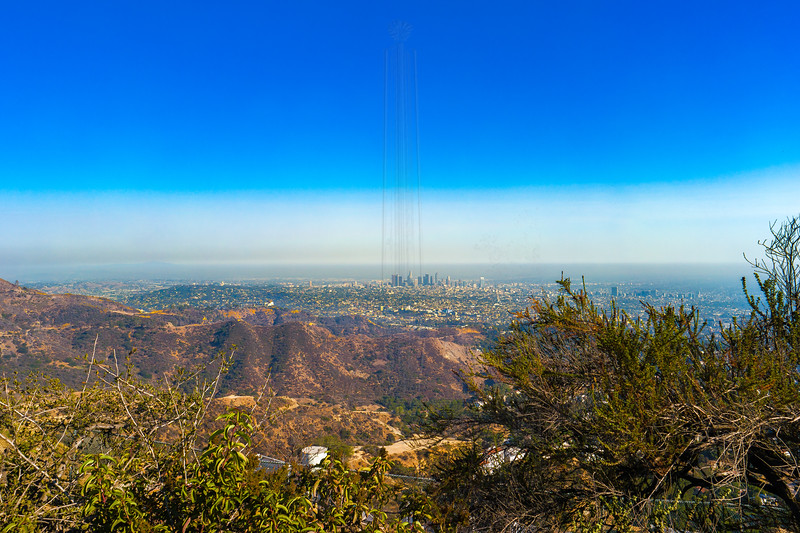 View to the southeast from Mt. Lee. From left to right you see: Mt. Hollywood, Griffith Observatory, Downtown Los Angeles, and mid-Wilshire. At the bottom of the picture you can see a portion of the back of the Hollywood sign and the fence that surrounds it.

Mt. Lee is not named after the Civil War General, it’s named after Don Lee who had an auto dealership and had branched out into broadcasting. The towers you seen in pictures of the Hollywood Sign are where he set up a studio and broadcast facility on the top of the mountain. It’s now owned by the City of Los Angeles and used for city communications.