J. Paul Getty was one of the richest men in the world in the 60’s and 70’s(he died in 1976), making his fortune in oil. He had a ranch house along the Pacific coast at the border of Malibu and Pacific Palisades that over looked the Pacific Ocean. He had amassed quite a large art collection so he opened a gallery adjacent to his home in 1954. This gallery began to run out of space so he commissioned a new museum modeled after the Villa of the Papyri at Herculaneum. This new museum opened in 1974(Getty never visited it since his primary residence was in England). It was a pretty big draw when I was in high school, but I never visited. After Getty’s death, his will created the J. Paul Getty Trust with an initial endowment of $600 from his estate. The Villa, though it had just opened was already running out of space; so they planned and eventually built a new museum complex in the west LA community of Brentwood(it took about 20 years due to NIMBY). With the new complex in place the entire collection was moved there and the Villa was remodeled to provided for a home for the Greek, Roman, and Etruscan antiquities as well as additional parking, an amphitheater(which also serves as the museum entrance), and seismic reinforcement. The Villa was reopened it 2006. We’ve been planning a trip to the Villa with a friend, but complications in schedules made it difficult; so I decided to try to get there myself via rail/bus. The journey took a while but was pretty easy to get there.

There are no fisheye pics here because I didn’t get the fisheye lens until later in the months; this trip probably encouraged me to get it.
Read More 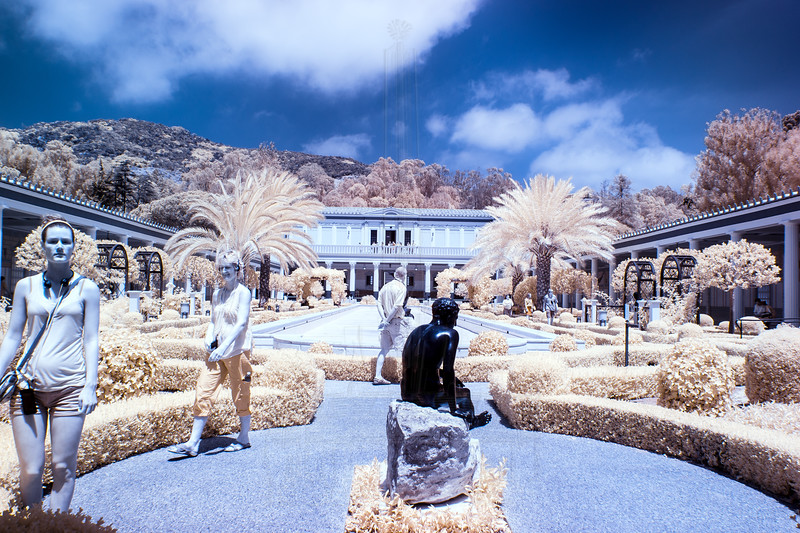 Pretty much the same view as above but taken with my near infrared camera.